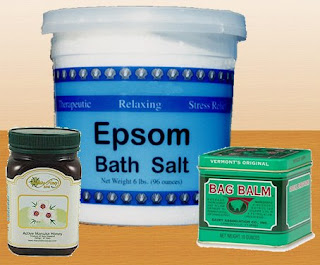 Today and yesterday were the most productive days I've had since I had surgery August 4. FINALLY, I can see noticeable progress in the healing of both of my wounds. The large one is not oozing anymore (most of the time) and it is finally starting to generate new skin. In this past week alone about 1/3 of it has gotten covered over, and that's really encouraging. It started with little raised white dots (I call them "skin volcanoes") that must have generated the skin cells, because shortly afterwards there were little islands of skin that eventually started filling in between. The new skin is not completely stable yet, and it's very sensitive, but at least it's not a huge gaping completely OPEN wound anymore. The smaller of the two wounds (in the crease of my knee) has also made considerable progress since the weekend, and I think that one will be probably heal over by the weekend at this rate.

Even better, the swelling in my leg around my largest wound (and also in the back of my knee) is starting to subside enough that I can bend my leg to a 90 degree angle (but still not much more) because the skin is extremely tender and thin right where the folds start when I bend my leg. The area that's a purple color around the wound has also gotten smaller and the fluid seems to be less noticeable, which I'm sure is due to the antibiotics.

Anyway, I got a lot of legwork (no pun intended) done for Advent in the last couple of days, and today and yesterday taught all the kids in the 4 RE sessions the music for their end-of-year Mass in December. It was a blast and I got a lot of nice compliments including from a catechist who asked if I was a music teacher--she said she'd been a teacher for 24 years and thought I was very professional and did a terrific job.

I must say I was REALLY, REALLY happy with all 4 sessions. I started and ended exactly in the time allotted, without rushing, and covered everything that needed to be done in an organized way. My voice held up better today than yesterday, but my cough is still persisting even after 5 1/2 days of Augmentin.

I was able to get through both sessions both days without excruciating pain in my leg, and I haven't used the gel packs since the weekend. Last night after soaking in the tub with epsom salts, which I've been doing almost every night since radiation ended, my largest wound developed a shiny hard coating for the first time. I've been able to leave my leg uncovered most of the day as long as it has either XClair or neosporin on it to keep it moist. I've also been using a lot of Vitamin E oil on my skin, still using my manuka honey (which is almost gone) and for the past week or so, "bag balm" to keep the skin around the wound soft since it has lanolin in it. Up until the last couple of days, it has been very difficult for me to do even the most simple tasks if they require walking into other rooms, standing for very long or moving around too much.

I go for my CT scan of my lungs, MRI of my leg and followup with Dr. Oskouei on Friday, and my followup with Dr. Godette on Monday. I am hoping that my leg will be almost back to normal by Thanksgiving, and what a happy one it will be this year now that all of this is behind me.

I've been taking pictures of my leg daily, and will try to post those on Friday after all my appointments. Bye for now,