Helen the Hibiscus has bloomed! 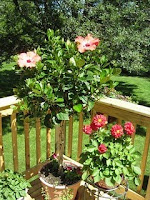 I'm so honored to be the subject of my friend Carol Shulfer's blog post today! She named her hibiscus tree after me and it bloomed. Thanks, Carol! Miss you! :-) ♥
http://cshulfer.blogspot.com/2010/06/happiness-helen.html
Also, while I'm here, I'll give you a quick update about what's been going on since last time. I had my 3-month CT of my lungs and 6-month MRI of my leg on June 9 and the results were both clean again. God has been VERY good to me and I am grateful for everyone's continued prayers. As of August 4 this year, I will be cancer-free 2 years, and after my September checkup I'll go for CTs of my lungs every 6 months and MRIs of my leg once a year (through 2013.) Then I'll go for annual CTs once a year (I don't know the frequency of MRIs) through August 2018. It's still surreal to me that this ever happened, and amazing that 2 years has passed already. I only rarely have problems with lymphedema in my leg now, and when I do it's usually mild, which is a huge improvement over this time last year. The scar from my worst radiation burn is much smaller than I would have expected and the tightness I had in my calf muscle for a long time is gone, probably because I've been exercising regularly since January. I also can sit on my heels which I WASN'T able to do until this year comfortably due to swelling in my calf and also the tightness in my quads and muscles/tendons/ligaments around my knee since I couldn't use it fully for so long.
As I mentioned above, I've been exercising regularly for the first time in my life, really, and I'm in better shape than I have been in years. Since last Thanksgiving I've lost almost 20 pounds, 13 of those this year (since I gained some back when I wasn't as diligent in mid-April to mid-May it took a while to lose it again.) I went to New York in mid-May for a girls' weekend; my friend Denise Killeen & I stayed with our friend and fellow sorority sister Laurie Gregg in Manhattan. We did a lot of FAST walking and I was able to keep up with both of them, and I'm positive that even pre-cancer I would have had to slow down or stop occasionally since they are both twigs and Denise's legs are so long it seems I have to take 4 steps for every 2 of hers.
I'm looking forward to my 30-year high school reunion in New Orleans on August 21; it will be much more fun for the people on Facebook than those who aren't, because we're all up to date with each other's lives and won't feel like strangers.
That's about it for now. I'm enjoying a more relaxed pace this summer and recharging my batteries so I can have a productive year. This is really the first opportunity I've had to rest mentally and physically since I moved to Atlanta over 3 years ago.

Which brings me to one final thought... it's hard to believe that I've been in this position for 3 years and 4 months already, almost exactly as long as I was Director of Music & Liturgy at St. James in Mukwonago WI. (Although Glen & I covered the Vigil Masses there for 3 full years before I became the Director.) Time flies....

and Happy 15th anniversary tomorrow to my sister Valerie and her husband Kevin. I wish y'all all many more!
Mike Rareshide, me, Kirk Redmann, Peggy & Kevin Schott
at Val & Kevin Linn's wedding, July 1, 1995. (Kirk & I sang.)
Posted by Helen Sigur at 11:08 AM