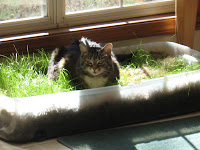 Helen - I'm glad you are doing better and liked the Burt's Bees products. I'll see you at the 8:30 OCIA Rite of Sending mass since my husband Dick and I are sponsors. Can't wait!!! God Bless you!

P.S. I just joined on Facebook too! We'll have to become friends. Hugs!! -Maggie